According to poll, 59 percent do not believe Georgia is a democracy

16.01.2020. With less than a year before elections, poll results released today by the National Democratic Institute (NDI) and CRRC-Georgia show that Georgians continue to lose faith in the direction of their country, with 53 percent believing the country is going in the wrong direction and only 19 percent saying right direction. Further, 59 percent do not believe Georgia is a democracy now, a significant increase from 46 percent just one year ago in December 2018. “It is alarming to see such low public approval of democratic institutions, and it does not bode well for the country’s future growth and stability,” said Laura Thornton, senior director. “It is incumbent upon all political leaders, but particularly those in power, to rebuild the public’s trust in the country’s governance and ensure the legitimacy of the upcoming election process, which is currently under question given the failure to adopt promised election system reform.”

Trust in Georgia’s institutions and leaders is also declining, and the number of Georgians who evaluate the current government’s performance as “bad” has increased from 49 percent in March 2018 to 64 percent today. The poll also shows increasing negative assessments of the president, prime minister, courts, and parliament. Public opinion of parliament is at an all-time low with 57 percent evaluating its performance as poor and only nine percent ranking it positively. Most Georgians, 64 percent, do not think parliament takes into account their opinions, and 68 percent believe that members of parliament (MPs) serve only their own interests. 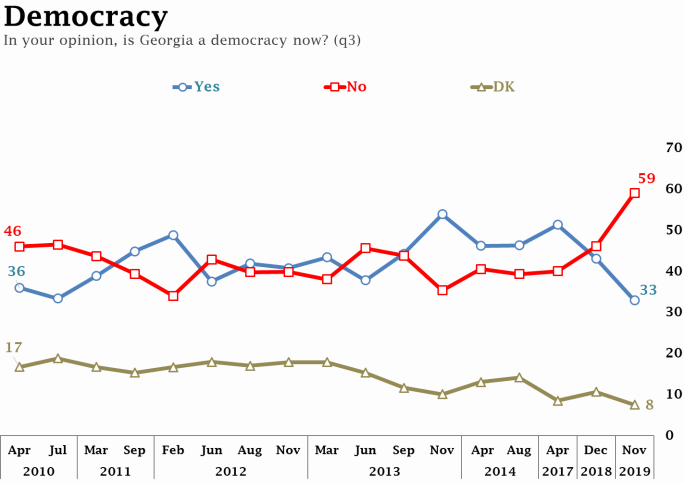 Of the main public institutions, the Georgian army has the most positive assessment, 52 percent, followed by the Georgian Church at 50 percent, which has dropped significantly from 64 percent in July 2019.

Reflecting on the protests and violence that took place in June 2019, a plurality, 45 percent, hold the government responsible. Most Georgians, 59 percent, are aware that the Georgian Dream agreed to June 20th protestors’ demand to switch to a fully proportional election system for the 2020 elections but were unable to secure the votes in parliament to deliver this pledge. Of these people, 70 percent, view this development negatively. 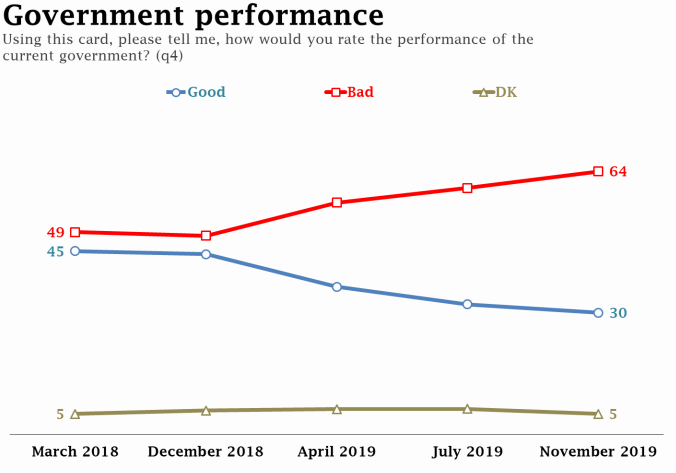 A plurality of Georgians cannot identify a party that is closest to them, with 19 percent choosing ruling party Georgian Dream, 13 percent opposition United National Movement, seven percent for European Georgia-Free Democrats, six percent for the Labor Party, five percent Alliance of Patriots, four percent Political Platform-New Georgia, and three percent Democratic Movement-United Georgia. While 65 percent of respondents said they would vote if elections were held tomorrow, 56 percent are undecided for whom. Only 33 percent of respondents said they would vote for the same party they voted for in 2016. 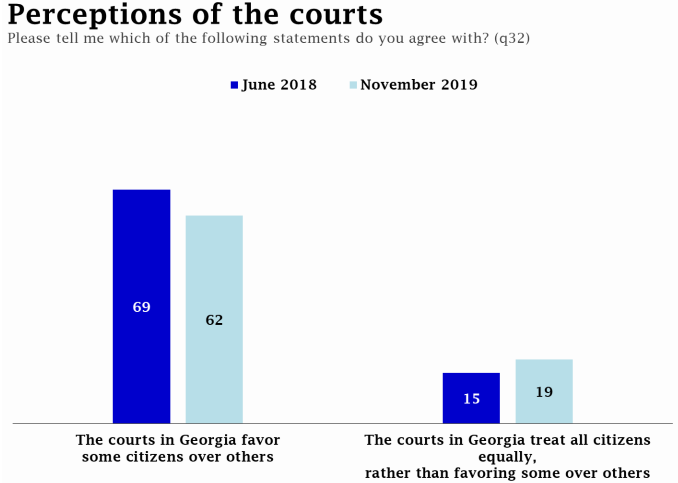 NDI surveys public opinion to help Georgian stakeholders diagnose and address issues of public concern by providing accurate, unbiased and statistically-sound data. This poll aims to capture the most relevant information to foster the development of responsive policies and governance. A wide range of leaders from across the political spectrum have reported that the polls are important to their work and encourage continued polling. The results reflect data collected from November 19-December 13, 2019, through face-to-face interviews with a nationwide representative sample of Georgia’s adult population, excluding occupied territories, that included 2,180 completed interviews. The average margin of error is +/- 1.9 percent.